Finally able to get a bike!

Finally able to get a bike!

Hey everyone,
I was finally, after years of school, able to buy a bike and start to build my first Cafe project. I am very new to bikes. I spent some time researching and lurking Craigslist and finally found a bike, I hope, that is worth putting in some time. Either way should be a fun learning experience.

Recently picked up an 81 CB650C with about 20k miles for $1800. First ride and I fell in love man, she rides smooth as far as I can tell with no leaks. The previous owner had a local shop make some mods at an attempt to convert to a Cafe. To be honest, looks like he probably overpaid just to have some Clubmans, a new tank, and chopped fenders. He said he put $3600 into the bike...not sure where but I am no expert to say the least. Anyway! I love the bike and can't wait to put some time into it.

First on my list tinkering is to have the frame straightened, place a frame loop, and order a custom seat. Next I want to work on the top triple. It's a jumbled mess? I don't know, I feel like the light sits too high smd the guage is too high and big. I'm pretty tall and not digging the Clubmans, not too comfortable for me. I want to swap out for some clip ons amd see how that goes. Then I want to work on the tank by pounding some knee dents and repainting it Pearl Black. I'm a still on the fence about the knee dents.

Any of ya'll have any suggestions for a minimal top triple that would work with this bike? That fuse box has me a little nervous and I'm not sure grinding that and the mounts is worth it or would be safe.

Glad I stumbled on this forum. Ya'll have some rad bikes and great advice.

Welp. Just got raked through the coals on another forum due to my ignorance about bikes. I have a lot to learn and can take it to the jaw without being knocked down. I think this bike would be a cool tracker versus cafe the more I read and learn. I got some really great advise on Function over Form. I think the first thing I will do with this bike is replace those clubmans. Super uncomfortable for me. I like the European Bars (I think that is what they are called). Or maybe superbike or straight bars. I am going to leave the top triple how it is. Still want to work on the tank and grind off some stuff.

Welcome to the forum (and world of 650s). I saw you get raked on a few other forums. Some guys are ruthless!!

Euro or tracker bars are excellent in my opinion. Pretty comfortable, not too aggressive. I have them on mine. I think they were 2" rise and 5" pullback. 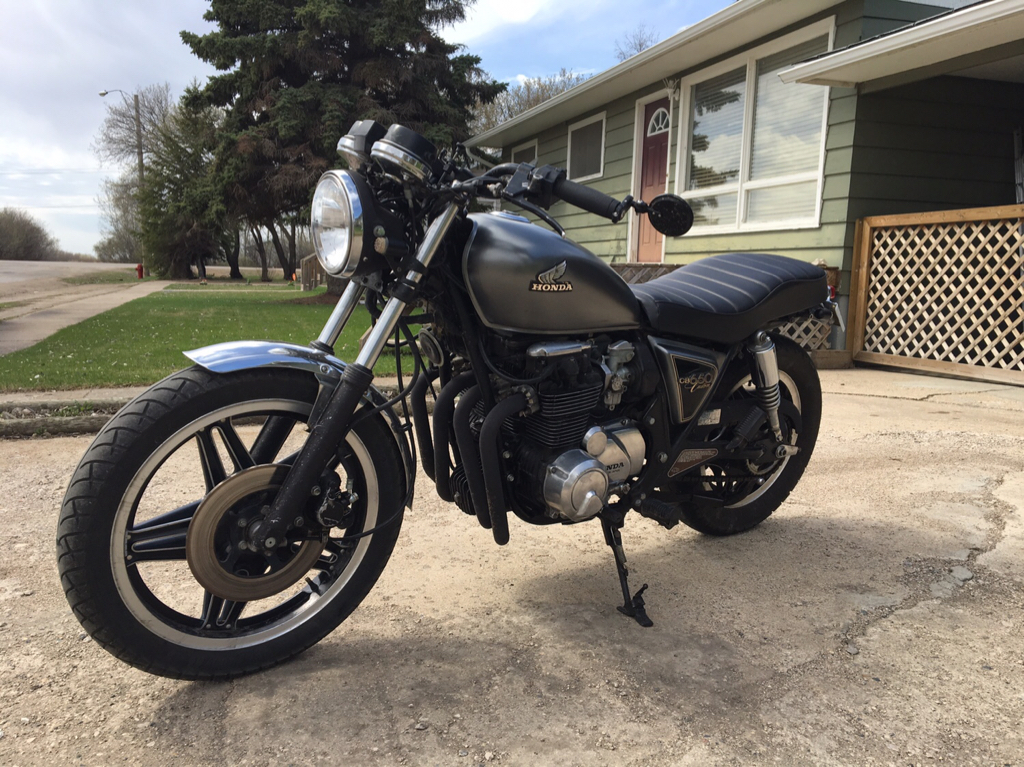 Perhaps straight bars or clip ons would be ideal. Clubmans are too uncomfortable and are a pain on the wrists. I did some research and found the original owner of the bike. He gave me a rundown on the work he completed on the bike for selling it.

"Fuel tank adapted from 75' CB550 Super Sport and painted House of Kolor Lime Gold by AJ's customs in Mesa, Arizona. The exhaust system is a MAC's 4 into one . The carburation includes a Dynojet stage three jet kit with K&N air filters, recently tuned and passed emissions. Tires are Dunlop Battleax with around 1,500 miles on them. The front brakes have been coated with ceramic paint. Miscellaneous parts were powdercoated including the swing arm. Miscellaneous parts around the bike have been fabricated by a professional machine shop from aircraft grade aluminum and polished. The only parts on the bike that look out of time period are the brake and clutch lever and remote oil reservoir that are from a Kawasaki ZX6 (circa 2002). The front suspension has been rebuilt. The bike is in good mechanical condition and has 19,509 miles. No motor work was required in the renovation. The valves have been adjusted in 2011. There is a small oil leak from the top end area which I am told is normal for this period Honda CB models. The speedometer gauge face has been cracked."

I'm gonna sand down the tank and beat some knee dents in it this weekend. That "Kolor Lime Gold" is awful and sore on the eyes. I was pondering on what to do with the Seat. I like the idea of a flat seat with a metal cowl but that dip and hump in the frame makes this bike a terrible choice for a thoughtful cafe racer. I considered about welding the frame straight versus a frame swap to a 550 but that's too much work.

I've thought about maybe doing a bobber/cafe bike. Maybe both critics of those genres can yell at me then! Below is an image of a great looking bike. I would chop that rear fender and throw the tail light behind the seat. I'd have to run to the bike yard a few miles down the road and pick up a different tank, not a big deal. I could chop the rear frame and weld a loop and fabricate my own seat. That's the fun part about owning a bike, you can do whatever the fuck you want. Update pic. Have done some work over the last few months. My 8 year old daughter has gotten a serious kick out of helping out, which that alone has made it all more than worth it. We recently had the carbs rebuilt by a reputable shop that specializes in vintage Japanese bikes. They have been a great resource to say the least. In fact, they hold a vintage bike gathering every so often where a bunk of folks come out and talk shop.

Things we did over the last few months:
Stripped about 3247 layers of pain off that tank...
Tapped some knee dents. That was fun and loud.
New Seat. Needed to make multiple adjustments to it. Was from MotorcycleSeatsDirect.com which was a complete hack job. DO NOT Buy from them.
Electric Tray under the seat. My daughter designed and made it. So proud!
New AG battery rewired to the seat cowl. Original, I know. lol.
New Clip Ons. The Clubmans are super uncomfortable. Was thinking tracker bars too.
Cleaned up the top triple. It was a cluttered mess.
New rear absorbers. The PO installed ones that were not safe and wrong size.
Chopped the frame under the seat to straighten it out. That was fun learning how to weld. This allowed the new seat.
New brake light and plate holder.
Forks rebuilt.
New paint on the 75 cb550 tank.

Next I would like to figure out how to install some Rear Sets but this may be a huge challenge where I may just end up with new pegs instead.
New Tires.
Rebuild the clutch.
Install new Choke cable. Totally broke it a few days ago.
Shorten the cables.
Start a new build.

That's nice!
Have a problem with your CB650? Have a technical question? Click here!

Return to “Show it off”

Users browsing this forum: No registered users and 5 guests